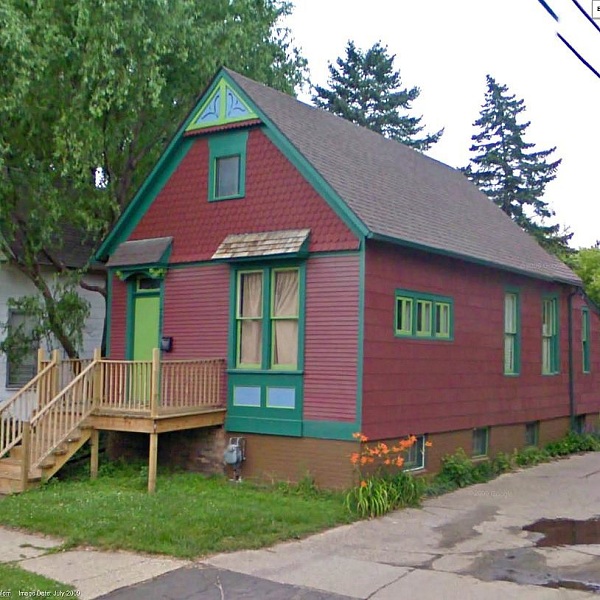 I checked out this West Village cottage yesterday. Although my knowledge of carpentry is lacking, I did have the wisdom to invite Scott to see it with me. I'm glad I did.

I knew ahead of time that the house was completely gutted, as any house I can afford will have to be anyway. I like that it has a new roof and a nice, dry basement. The foundation is solid and the house isn't sinking or sloping. The owner says that the sewer line wasn't replaced, but is fine. A Victorian cottage is probably my ideal house, and I like that the house is a blank canvas in which I could build any arrangement of rooms that I like. The owner would consider a land contract, which definitely helps with affordability.

There were also disappointments with the house. I was horrified to see that the ceiling joists were 20-foot 2x4s, although they are the actual-2-inches-by-4-inches kind made from old-growth wood. They would still absolutely have to be beefed up with at least 2x6s. The roof rafters were a little far apart and sloped inward very slightly. Although the old roof had been torn off and new OSB laid down, some of the old slats (that have a technical name that I can't remember) were missing, and not giving the OSB the support it should have. A knee wall should be built in the attic to help support the old rafters, but then I'd have to figure out how to probably support *that* load (if I'm even using the right terminology). There were no headers above any of the windows. Yes, the house has stood that way since at least 1889 (when it appeared on a Sanborn map), but it's just not responsible to leave it that way. I was disappointed that only maybe 2/3 of the floors were intact, so the missing flooring would have to be patched up with 3/4" plywood, or all of the old flooring would have to be replaced completely.

All of this work is *doable*, but at an asking price of $17,000, I would risk outright offending a friend of a friend if I made an offer equal to what I have been advised is the actual value of the home. If the structure was solid and ready for HVAC, plumbing, electrical, insulation and drywall, I'd feel more comfortable offering something slightly closer to the asking price. And although West Village is a stable neighborhood by Detroit standards, this particular block is as I've said before the worst block in the neighborhood.

I think the main draw of this house is the option to buy it on a land contract. Without it, it probably doesn't make a lot of sense objectively. Scott put it into perspective this way--if I had $20K in cash, would it make more sense to buy this house, or the house on Lincoln Street? (I turned that house down because a land contract wasn't an option and I'd have to borrow money just to buy it.)

This house has been for sale on-and-off for well over a year, so there is no need to rush on anything. I just have to figure out the threshold of how low of an offer it would take to make me look like a prick and decide if I'd want to pay just slightly more than that. If it doesn't work out, there will never be a shortage of old, cheap, dilapidated houses in the city. In the words of Tom Cieszkowski (that I may quote a little too often), "Sometimes the best deal is the one you don't make."
Collapse