A storm on Saturday caused a somewhat large section of a tree to slump over and block access to the alley on Bagley. I realized after a few days that the city probably wasn't going to remove the damaged branch, so I attempted to take care of it myself. I started hacking away at the mess with lopping shears, but those can only cut through branches that are, at most, 1" in diameter. I hadn't thought ahead of how I was going to deal with the more massive sections.

Luckily, a neighbor who lives in the red house on the southwest corner of Bagley and Brooklyn Streets walked up with an electric reciprocating saw (aka Sawzall®) fitted with a pruning blade. He gladly chopped up the larger sections while Matt and I piled up the remnants. Despite what people say about modern American society, the people on this block are very friendly and helpful.

This neighbor's house has an interesting history. It originally stood half a mile to the northwest from its current location. It was built in the 1880s at 315 Cherry Street. The number became 1839 in 1921, and the street name changed to Kaline Drive on August 2, 1970 in honor of Detroit Tiger Al Kaline. In the summer of 1985, it was moved to the south side of Bagley Street west of Brooklyn along with two others. I believe this was done so that it would be within the protective boundaries of the nationally recognized historic district. 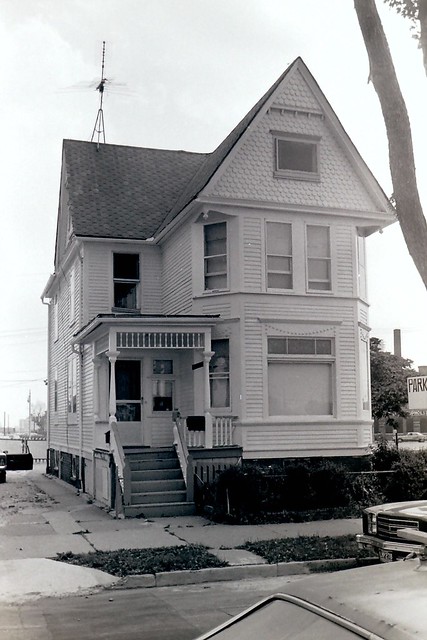 Our neighbor's house in 1976 at its original location.
It looks a lot better now.
Collapse