After moving more boxes last night, I stopped at the open house in Corktown for a place that has just been rehabilitated by my friend Dave, who also owns the house next door (which I have previously researched for my blog). I plan on researching this house, too. I don't have any before and after photos to show you, but the renovation was fantastic. The horrible asphalt shingles that enveloped the house are gone and the original wood siding has been restored.

Displayed at the open house were items unearthed during the renovation. You can barely stick a shovel in the ground next to a house in Corktown without hitting a 100-year-old glass bottle. One of the bottles display was from a drug store owned by a "W. A. Dohany" at the corner of 15th and Michigan Avenue, an intersection which sort of doesn't exist anymore. There is a little nub of 15th Street left on the north side of the street, but the road was removed to create Roosevelt Park more than ninety years ago.

Of course, I couldn't help but find out more about the bottle's origin when I got home. The drug store, owned by William A. Dohany, was actually on the south-east corner of the intersection, meaning that it was among the buildings condemned to make way for the park. 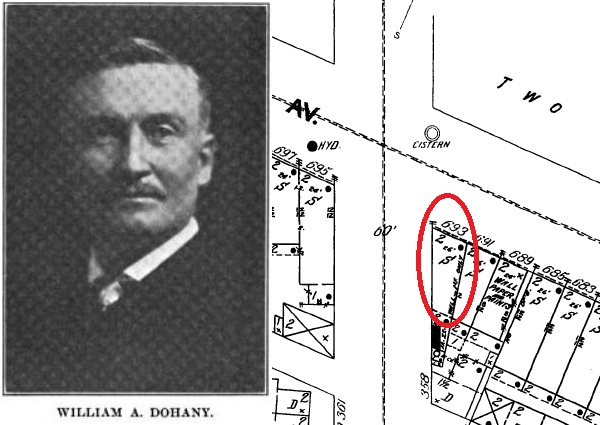 Dohany was originally from Farmington and came to Detroit in 1889. He opened the store two years later and operated at that location for 27 years. The building was the last structure standing in front of Michigan Central Station by 1918. In June of that year, while preparing to move to a new location across the street, Dohany passed away at the age of fifty-five. According to his death certificate, the cause of death was "acute gastritis from eating canned lobster".

At the open house I met Facebook acquaintance Sarah Cox, who frequently and very kindly links to my history blog posts on Curbed Detroit. By the time I had a chance to speak to her, however, another guest chose to deliver, to me personally, at that moment, a very long anecdote about his job. Oh well, I'm sure we'll have an opportunity to have an "IRL" conversation some other time.
Collapse