My grandpa's funeral visitation was Friday. I was glad to see Kevin and Chris stop by. Kati also visited with Jeff and their baby. In the early evening representatives from the Polish Legion of American Veterans--of which my grandpa was a member--performed a brief ceremony and paid their final respects. After a scripture reading, my cousin Yvonne--the eldest grandchild--gave a very eloquent and moving tribute. She mentioned my genealogical research, although my second cousin Bob R. has really done the best research on the Bonkowski line.

The funeral mass was Saturday at my grandpa's church, Queen of All Saints in Fraser. The building itself is a mid-century architectural travesty, but the priest is warm and friendly (and Polish) and his tribute was genuine and sincere. The six male grandchildren and my one male cousin-in-law were pallbearers. After the mass, non-active military personnel performed a ceremony outside of the church that involved rifle volleys and a performance of Taps. This was not the official military funeral ordered through the U.S. Government--that will occur later, at Great Lakes National Cemetery, probably in the spring.

In the afternoon, my mom and my siblings decided to drive by the houses where my grandpa had lived. According to his birth certificate, he was born at 6324 Chene Street in Detroit on April 13, 1922. Unfortunately, the street grid doesn't even exist at this location, and it's now part of a parking lot for GM's Poletown assembly plant. You know, the one Coleman Young wanted to build to get revenge on whitey.

My great-grandparents did not live at that address long. They had immigrated from Poland in 1913 and originally lived on the east coast for a few years and moving to Detroit only right before my grandpa was born. The 1923 directory shows the family living at 3925 Oliver in Hamtramck, where they stayed until the early 1930s. 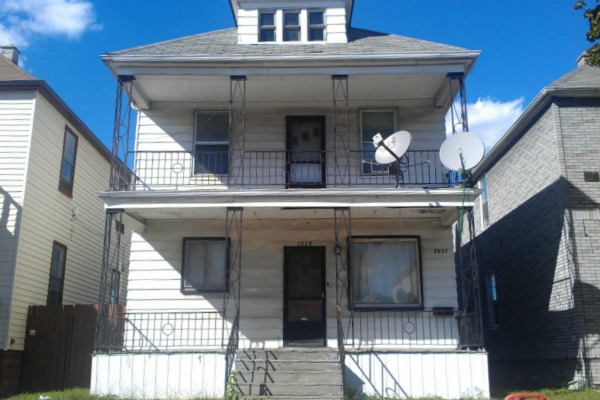 Although this area is very poor now, all of the houses appeared intact and occupied, and a lot of Bengladeshi children were playing on the sidewalk.

From that house my grandpa's family moved to 8219 Georgia. When my grandparents were married, they lived in the upstairs of this house while my great-grandparents lived on the first floor. 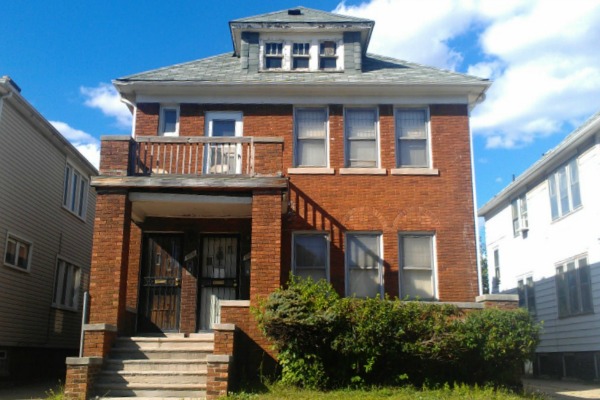 The neighborhood has been destroyed. This house is one of the few left on its block. 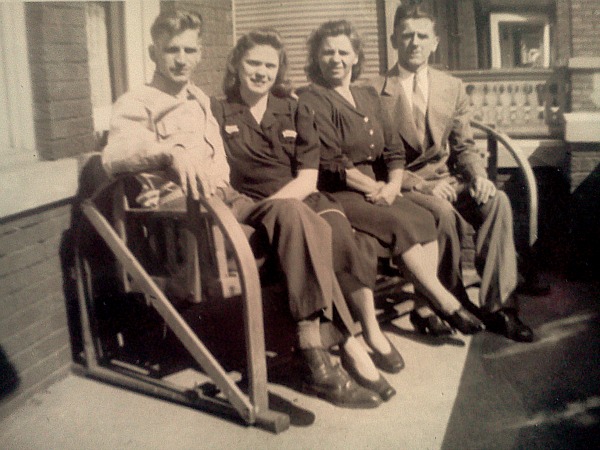 Grandpa (far left) sitting on the porch of this house with
my grandmother, Rosalie (Waldowski) Bonkowski, and his parents,
Julia (Stankiewicz) Bonkowski and John Julian Bonkowski.

My grandparents remained on Georgia Street until around the time my mother was born, when they moved to 19941 Hickory. They were only the second owners of that home. 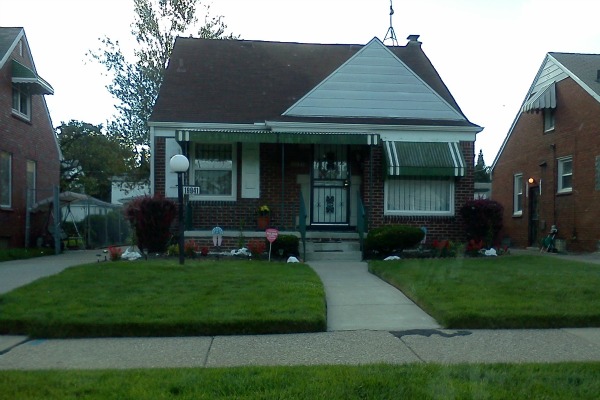 Finally, in 1989, my grandparents made the wise decision to move to the suburbs. They moved to a condo in Roseville where they spent the rest of their lives. It's amazing to see that he nurtured the hell out of the lawn on Hickory to the point that it's still the greenest on the block twenthy-three years after he moved. I'm glad to see that my grandparents' home is well-maintained, but the neighborhood is not stable. The Marinellis' former house next door is boarded up.
Collapse