I'm currently enjoying the honeymoon phase of living in my "new" house. I even more firmly believe now that moving in was one of the smartest decisions I have ever made. When I first moved to Corktown in 2005 I would walk by this house and wonder what it's like to live here, and fate has more or less delivered the answer to me whether I wanted it or not.

Living here is great so far. Even cleaning is gratifying, especially if you're washing windows that you personally restored or sweeping flooring you personally installed. It's also fun to finally be in control of the house's layout. Joe and Matt have been busy moving miscellaneous items out of the house, and the first floor now looks normal and functional. Part of my "honeymoon" was a shopping trip to IKEA on Sunday, during which I bought a rug for the parlor and an island for the kitchen. 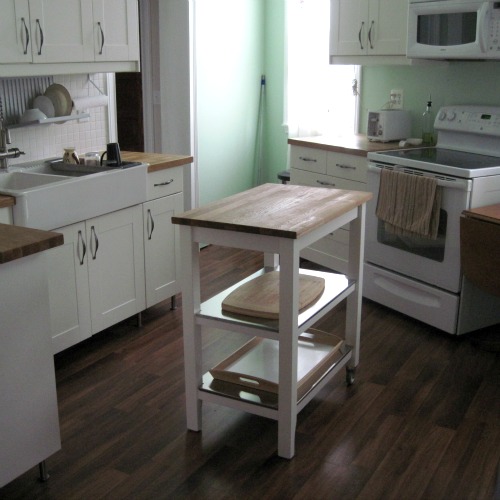 Not everything comes easy. I've been meaning to fix a lamp that used to belong to Joe's grandmother. I finally disassembled it and bought the supplies I needed to fix it, but one metal piece had a hole in it that wasn't big enough for another piece to fit through. I have a step drill bit perfectly suited to make the hole bigger, but it was too big for my drill's chuck. I found an object in my ratchet set that could hold the step drill bit, and I just stuck the philips head screw bit into the back of that thing. This wobbly, dangerously unstable arrangement it what I used to successfully make the hole big enough to finally fix that frigging lamp after all these years. It was either really stupid or really smart of me. Do I get to pick which one it was? 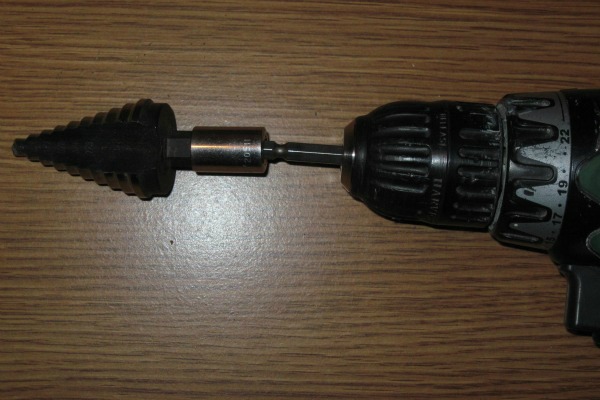 I took Monday and Tuesday off of work because my dad came into town with his girlfriend Bonnie. On Monday morning they came over to the house, which my dad hasn't seen since it was a gutted, filthy shell. We went out to eat downtown afterword, and during lunch my dad offered to buy me a new light fixture for my dining room, since I posted about one I liked on Facebook a couple of weeks ago. We didn't find one like that at the store we went to, but we ended up coming home with one that I think suits the room even better: 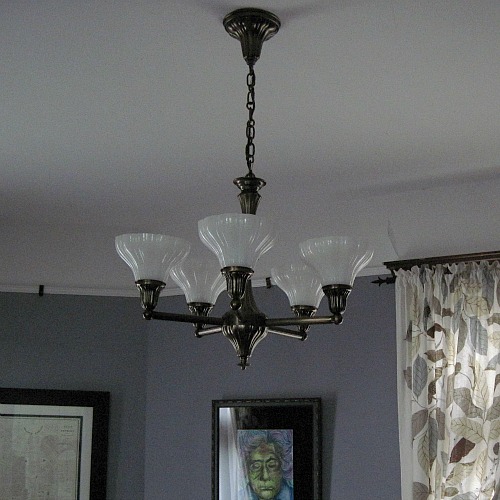 We bought the floor model at a discounted price. It's called the "King Edward". My house was built at the very end of the Victorian period, so Edwardian furnishings still compliment it very well. Although it is suspended by a chain, the rest of the chandelier is reminiscent of the kind of gas fixtures that would have been used in this house. (Gas pipes are still in the walls and ceiling, but I had Don disconnect them during the renovation.) I'm really happy with this piece, which I think reflects the dignity and beauty the house had when it was originally built.

Later that evening my dad, Bonnie and I went out to see Detropia at the Main Art Theatre in Royal Oak. The men who the movie focuses on (Tommy Stevens, owner of the Raven's Lounge on Chene Street; and George McGregor, president of United Auto Workers Local 22) were really engaging, but overall it wasn't the strong, definitive Detroit documentary I was hoping for. I did enjoy (maybe in a kind of sinister way) that the only mention of urban farms in the film was a humorous, outright dismissal by men talking about it on a porch. 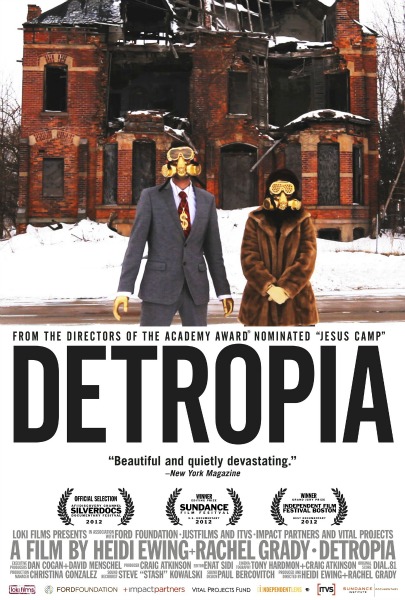 On Tuesday the three of us visited my great-uncle Art (the last surviving sibling of my dad's father) and aunt Annie. Uncle Art has been interested in genealogical research and actually visited Poland and saw the church where his mother (my great-grandmother) was baptized. We had a really nice visit, drinking coffee, looking through old photo albums, and talking about the "old days," even if that sounds hokey. I was very glad that we made the drive up there. 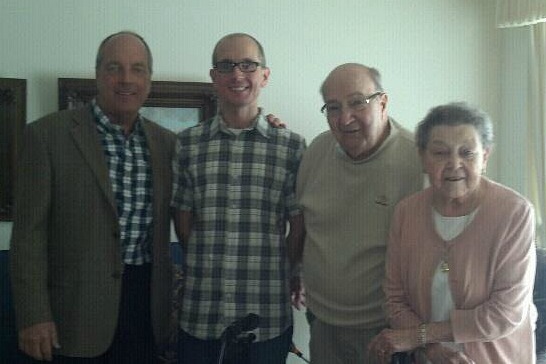 Yup, we all got that baldness gene all right!
Collapse