The screen on my still-under-warranty laptop broke, so the thing is on its way to sunny Texas for repairs. In the meantime, I was forced to focus my mind on home improvement. (More than usual.)

It wasn't until Joe and Matt moved their stuff out of the house that I remembered baseboard moulding was never installed on the north wall of the kitchen. I fixed that problem this weekend. Mitering trim for a trapezoid-shaped house is always aggravating.

When nailing down the moulding, I decided that it was also time to repaint the kitchen. I was tired of the green, which was starting to feel just kind of "puky" to me. I thought that a light grey-blue would better match the kind of diffuse light that comes in from the north-facing windows. It would also match the cabinets better. I'm not sure how one color can go better with white than another, but it just does. There are already a lot of blue rooms in the house (two and a half bedrooms, the TV room, and downstairs bathroom), so I might redecorate one of them to make up for it. Even if I wanted to keep the kitchen the same shade of green, the room just needed a new paint job either way. 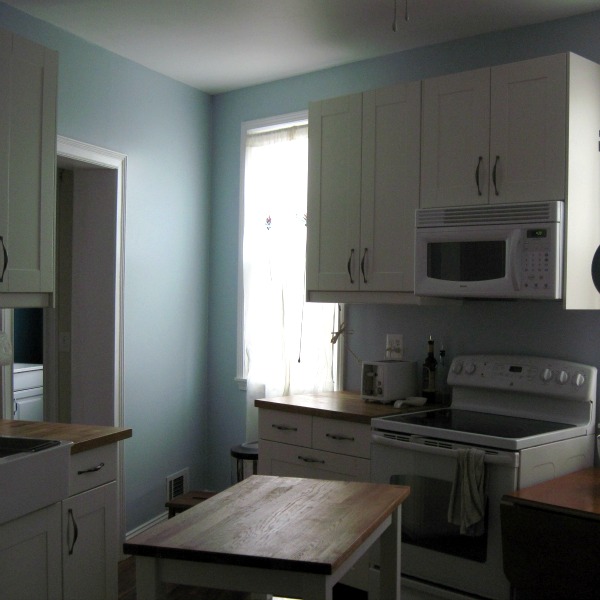 (Click here for a "before" photo taken from a similar angle.)

I hate the names of paint colors. Not because they're silly, but because I totally fall for them. When I see a color I might like, I then look at the name to confirm whether or not it's a good choice. I'm basically an idiot. When I found this particular shade of blue from Olympic paints, I saw that it was called "Forevermore". What a tragically melancholy name!

The color itself also makes me think of Skullman from Mega Man IV.
Collapse