After just over a year of vacancy, my former house at 1733 Wabash is finally for sale. (Click here to see a listing.)

The asking price is $14,000 -- a full $6,000 lower than the cash offer I had on the place when I was trying to short-sell it. I'm just glad that the bank isn't simply neglecting it, and that it has a chance at a new life if the right investor buys it.

The following phrase is for people who might be Googling that address: 1733 Wabash has severe foundational damage.

The house is worth saving, but potential buyers should know a few things. Notice, for example, how far backward the house is leaning: 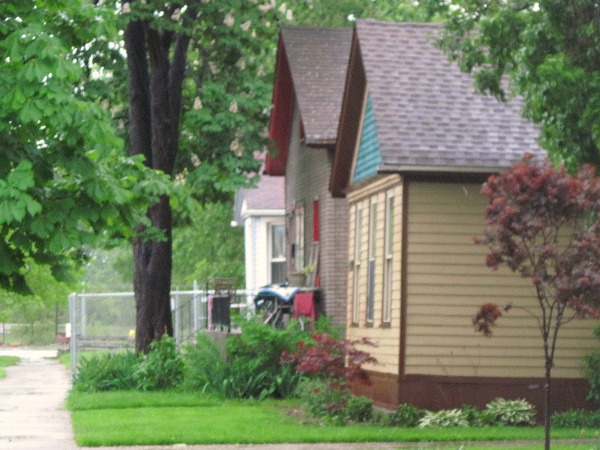 Buyers should also know that there is termite damage to the strucutre, especially in one of the beams near the back of the house. On top of that, the cedar posts that the house once rested on were removed and replaced with concrete blocks that were not placed correctly. Click here to see photos of the crawlspace.. In short, the house needs to be gutted, lifted, and set on a new foundation.

At least the roof is in great condition! A few other features: pre-researched history, pre-cut chicken door in garage, and just a short walk away from a popular barbecue theme restaurant.

When the bank told me that no short sale offer would be considered, I removed all of the cabinets and the bathroom sink, thinking that I would use them for a new project. 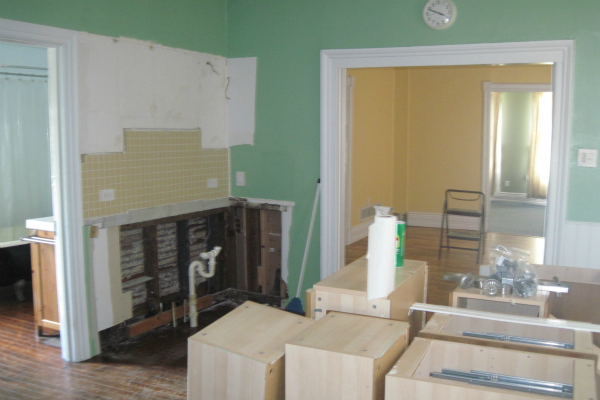 A friend of mine ultimately talked me out of that new project and I ended up moving into the Bumble Bee House instead. I have already made use of the bedroom and laundry room cabinets, but if the right person buys 1733 Wabash and guts it correctly, I would be glad to give them back the kitchen cabinets and bathroom sink. That is, if they like IKEA.

1733 Wabash was built around 1865, perhaps by its first owner Frederick Bechstein, a carpenter who immigrated from what is now Germany after the failed 1848 revolutions. In 1876 Bechstein moved into a new house on the north half of his lot, where the driveway now is, and rented out the old one. In 1897, the original house underwent a Victorian modernization, including a significant addition, and the the family moved back into it. Mr. Bechstein died in his house on Tuesday, December 22, 1903.

To whoever ends up with this house and gives it the care that it needs, this song is for you: