My mom and Bob (Joel's former partner) came over for Thanksgiving on Thursday. I know we were all supposed to refrain from shopping, but I forgot to buy potatoes, and University Foods was open... In the evening Joe came over to join us for pumpkin pie and a screening of Planes Trains and Automobiles, which is funny every single year.

On Saturday I went to Melanie's for a vegan Thanksgiving party, and all of the food was really great. She makes a gluten-based vegan-turkey loaf from scratch and casserole dishes that I'm always too lazy to make myself. I am also glad that Chris and Melissa made it out there.

This last weekend Joe and I hosted Airbnb guests (a young-ish couple) who were in town to attend a sort of meditation retreat at the Renaissance Center by "Amma the hugging saint". They were the kinds of hippies that I am nothing like, but I still adore. I wish I belonged to some kind of hippie group, but I'm obviously a terrible fit. I need to adopt some really crazy beliefs first. Theravada Buddhism is just too conservative.

Before they left, the woman very quickly drew a sketch in the guest book on her way out the door. She chose to draw a Buddha in the bhumisparsha mudra, the "earth-witness pose", in which he touches the ground: 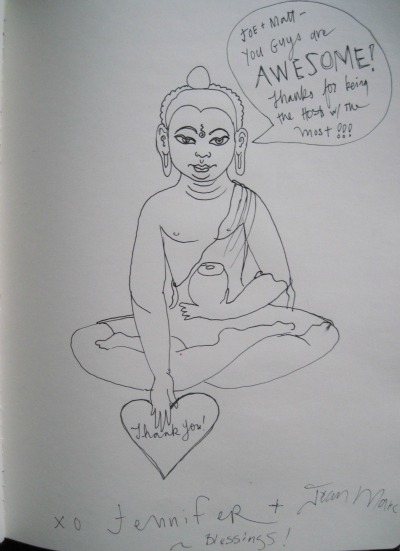 Biographers of the Buddha (whose name was Gotama) embellished the story of his enlightenment over time, since sitting under a tree doesn't make for dramatic storytelling. The concepts of greed, hatred and delusion were represented by armies of demons led by Mara, a Satan-like tempter. By the first century B.C., the stories included a last-ditch attempt by Mara after all of the other attacks failed. He said to Gotama, "What right do you have to become enlightened? Becoming a Buddha requires thousands of lifetimes of developing the ten paramitas. What witness do you have to say you have done these things?" -- Gotama touched the ground and said, "The Earth is my witness." Pathavi, the Goddess of the Earth, rose up and testified to the past deeds he had accomplished. When she spoke, the ground shook, and Mara's armies scattered.

People added some crazy shit to Buddhism, but I'm still moved every time I think about Gotama saying "The Earth is my witness".
Collapse