I can't stop thinking about that grotesque theater in Fort Wayne. I thought that it was a practically new building carelessly designed by nobody, but it turns out that it was constructed in 1974 and designed by world-renown architect Louis I. Kahn! (No relation to our Albert Kahn.) He was the subject of the 2003 documentary My Architect. I watched the film last night hoping that it would change my perspective on Kahn's work. It didn't. All I can think of when I see the building are those creatures from that episode of the 1980s version of The Twilight Zone.

I am still baffled by this man's fame. It's also disappointing that he was an even bigger philanderer than Frank Lloyd Wright, having children with two women other than his wife. Then again, "great men" always seem to fail at family life. Gandhi was not a good father. Herman Melville was abusive, and his oldest son committed suicide at 18. Gotama left his wife and baby (albeit with his rich parents). Beethoven didn't even succeed in getting married.

But there is still something compelling about the archetype of the crazed, solitary genius who creates works enjoyed by millions despite failing to fully connect with human beings personally during his or her lifetime. It was also inspiring to learn that Kahn didn't even "find his voice" until he was in his fifties.

Although I'm still overwhelmingly cynical about his work, I will say that I'm genuinely moved by the interior (although not the exterior) of the Phillips Exeter Academy Library. 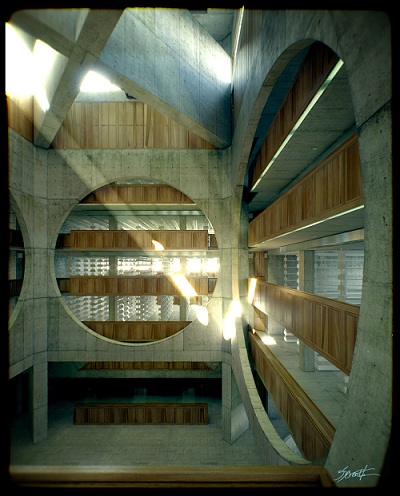